Canadian All Girls Math Team Shines on the International Stage 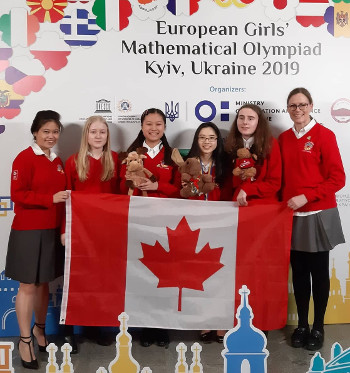 OTTAWA, Ontario — The Canadian Mathematical Society is pleased to announce that its second team to compete in the European Girls Mathematical Olympiad (EGMO) has returned from Ukraine, medals in hand. The Canadian EGMO Team earned two Bronze Medals and two Honourable Mentions.

The EGMO competition got started in 2012 when it was first written in Cambridge, UK and has since grown to include more than 50 countries. Participation in the EGMO is by invitation only. Each student competes individually to solve six questions in a competition lasting two days, four and a half hours each day. The Girls Math Team Canada was selected largely based on the results of the 2018 Canadian Open Mathematics Challenge (COMC) written in November, as well as a Team Selection Test that was sent to the top 15 girls from the 2018 COMC.

The Canadian EGMO Team was trained at the Fields Institute for Research in Mathematical Sciences, in Toronto from February 22-24. In addition to Professor Dorette Pronk and Sarah Sun, James Rickards (McGill) assisted with the training. James says he was very proud of the girls and their excellent showing at the 2019 EGMO. Rickards considered that it is important for girls to know that Canada supports their pursuit of mathematical excellence.

Deputy Team Leader Sarah Sun (GoldSpot Discoveries Inc.) says that it was a privilege to work with such a talented group of young women. She adds:

“I’m so proud of their achievements, and look forward to watching where their journeys take them.”

Canada’s presence at the European Girls’ Mathematical Olympiad was made possible in large part due to the financial support of the University of Waterloo’s Faculty of Mathematics, for which the Society is very grateful. The Society would also like to acknowledge the organizers of the Winter Training Camp at York and The Fields Institute for hosting the Girls’ training camp. The CMS is also thankful for the support of the Actuarial Foundation of Canada, University of Regina, NSERC PromoScience and the Samuel Beatty Fund. This support enabled the Society to send a Canadian team to this important event and celebrate the achievement of girls in STEM.

About the Canadian Mathematical Society (CMS)

Founded in 1945, the Canadian Mathematical Society (CMS) promoted the advancement, discovery, learning and application of mathematics in Canada. The CMS promotes mathematics through a rich array of activities including scientific meetings, publications, awards, prizes, grants, camps and competitions.